Skip to content
Posted on February 6, 2006 by Adrian Chan 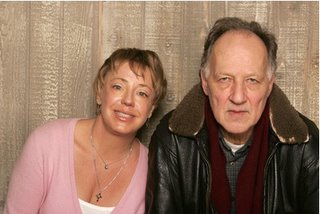 I’m a fan of Werner Herzog, enough of one to have hunted down a copy of Werner Herzog eats his shoe, back in the day when it was available only as VHS. And I think it’s great that he’s experiencing a resurgence of interest and relevance (so little of the New German cinema has) and that he’s exposing a new audience to his particular and unique personal pursuit of the “perfect image.”
But there was something unsettling in Grizzly Man, besides the obvious morbidity that ran as a subtext under the flim like the soundtrack we all knew we wanted to hear (but shouldnt, because, as the director appeals to Timothy Treadwell’s e-girlfriend, ‘You must never heard zis,’ in a sequence that is the only time we see the director, as if by appearing onscreen to validate the horribleness of what’s on the videotape, the last reel of Timmy’s life, left running while he and his girlfriend are mauled to death, he thinks he demonstrates compassion? Werner have you lost your humanity for a concept of it? And you complain that Timmy’s tapes show his girlfriend only twice — and you show yourself only once? I don’t want to jump too far to this conclusion Werner but I think the distance is not far: you betray your fascination by having chosen that moment to appear on camera, and it is precisely the moment you chose to appear that shows that for you the image you seek is detached from human experience, for the image is a concept, and while it may reflect, philosophically, on the human experience, you will remove yourself from society to get it.)
Werner’s agenda throughout the film seems to be to pull apart Tim Treadwell (as if he hadn’t already been pulled apart by bears…) and it’s not clear whether or not this is a result of Herzog’s encounter with Tim’s tapes, due to his fascination with the man’s ending, or whether Herzog has an argument with Treadwell’s naive and childish love of the animal/human kingdom. The kid mistakenly embraced the wild, thinking he belonged to it, simply because he couldn’t fake it any more in the society of man. But Herzog takes this out on the subject of the film. His compassionate appearance as witness to the taped “murder” (to Herzog, bears can be murderers — and he accuses Treadwell of projecting?) is false — it’s a cheap attempt to take the subject’s side, and it neither goes far enough to establish his sincerity nor far enough to establish his presence as an essayist, not a documentarian.
Herzog’s instincts as an image maker are among the best in the industry. But his exploitation of subject matter, a criticism wagered many times at his ability to create human tragedy among his actors and crew, is on screen in Grizzly Man, and left me queasy as I’m sure it has done many. This film ought to be refiled. Perhaps under “fictional biography” (next to the movie they’ll be making of Frey’s Million Little Pieces).
Herzog has an agenda, as a filmmaker, and as a documentarian. Does Oprah have a film club?