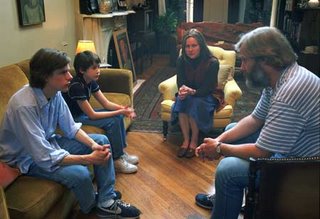 When little frank announces to his mother and her boyfriend, his tennis coach, “I wish I could come with you guys,” hidden meanings tumble out from between the lines as if the wheels on this family had detached and the carriage return simply departed the vehicle. And that, loosely, is how this little bumper car of a film goes. It’s an amusement in a parking lot of prep school American culture, where books are praised and besmirched, studied, written, and plagiarized. “Rather Kafkaesque,” as elder son Walter describes The Metamorphosis, by Kafka.

The phrases that spew and exit from Mom and Dad, and sons Walter (teen) and Frank (adolescent), hit you viscerally, punch-lines to the gut, funny and painful at the same time. Could they be more dysfunctional, this lot? If you put them in Scotland and wound back the calendar to, say, Thatcher’s reign? Is it possible that a kid might have an Oedipal conflict with his mother’s boyfriend? Or his mother, an Oedipal conflict with her son? This is not Capturing the Friedmans, but it could be “Letting fly the Freudians.”

Ultimately, the Squid and the Whale steps back from analysis and leaves the viewer to piece together the verbal dribble, miss-cues, and malaprops where they belong: as out of place as the characters that produced them. A broken home leaves pieces behind. No analysis puts it back together, no humor can mend its holes. A hilarious and poignant film.