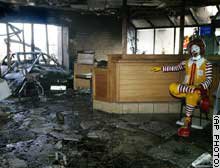 Violence. A language that can only be spoken.

Youths in France declared their motivation, or one of them at least. The death of two policemen, as revenge for the deaths of two of their own. The law of equivalence is spoken in other languages as well, most notably in the economy of capitalism. Capitalist exchange, however, uses a third medium—money—as a means of creating equivalence. This transfers value from one domain into another, more stable domain. And from there, money can handle transactions at a remove. In linguistic terms, form and content are held separate; utterance and uttered are separate. A car is not traded for a car, but for the amount of money the car is worth. That money is spent in any facility that can facilitate the purchase of the car (including online). An abstracted transaction medium, based on equivalence, has greater possibilities of resolving any kind of information than one that requires direct expression, immediacy, and for which there is not a symbolic transference.

Violence, in other words, can only speak itself. By the rioters’ own admission, only the deaths of two policemen will conclude the violence sparked by the deaths of two youths (in fact, it’s the killing of two youths/policemen, not just their deaths: the act of killing is the point here). And that makes violence a grammar that can only produce meaning when it is expressed in acts. Acts of violence are a conflict’s utterances. What is uttered, is uttered in the act itself. A violent event can only proceed until it has exhausted itself. It cannot be spoken elsewhere, otherwise.

Rosa Parks and Martin Luther King knew this. King, using Gandhi, knew that by participating nonviolently in situations of conflict, violence would be confronted with itself, and would end when the motivation behind it was exhausted by the reflection of itself. Nightstick upon nightstick, beating upon beating, the acts of violence exhausted themselves as media projected the images of brutality until the public conscience could justify and legitimate them no longer. Freedom marches and sit-ins worked because they were acts. Acts that set up and encountered violence.

It doesn’t seem possible to translate violence into other languages. Capitalism is the most successful means of organizing society that we have, and we know that it survives only on the basis of a vast reservoir of cheap labor and resources. And while it does seem to social conflict, and satisfy (to some degree) individual wants and desires, it can do so only for a few. (And it requires political and judicial controls, including the police, to take care of the edges.)

No, once the language of violence is spoken, it is hard to silence.