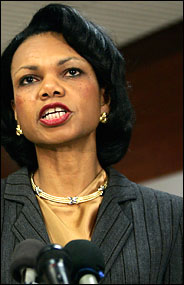 From New York Times, Dec 5, 2005
Ms. Rice insisted she could not confirm the existence of secret prisons because that would involve discussion of classified activities. “One of the difficult issues in this new kind of conflict is what to do with captured individuals who we know or believe to be terrorists,” she said. Many are “essentially stateless, owing their allegiance to the extremist cause of transnational terrorism.”

Rendition of terrorists to interrogation centers, holding cells, Gitmo beach resorts, or wherever, confirms the current state of sovereignty as a nexus of political power and authority in which sovereignty is tied to territoriality, territory and nationhood being the containers and arbiters of rights through citizenship, but the nation state being in its right still permitted to suspend claims to citizenship if it sees fit. What’s interesting is that we even bother to move these people to other countries. Apparently the rights accruing to a citizen in this territory (the US) are non-transferrable. Italian philosopher Giorgio Agamben wrote in his book Homo Sacer that “the camp is the space that is open when the state of exception begins to become the rule.” (p.168) Foucault, in his book Discipline and Punishment, described variations in this exercise of power and authority, from imprisonment to expulsion, containment and banishment… The nation state will always seek means by which to create an exclusion. Is it any surprise then that there are stateless terrorists out there determined to meet us where it makes sense — in an anyplace whatsoever (Gilles Deleuze)? The battle for freedom, its definition, articulation, and most importantly, the relationship between territory and freedom is playing out in the most undefined zones whatsoever (Pynchon)…

Personal note: I took classes from Condi and this has nothing to do with Condi… And by the way, she was a fantastic professor.