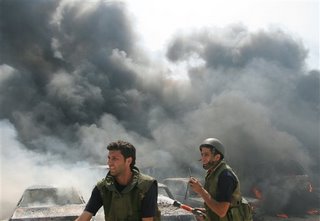 I watched a bit too much news last night, eager to keep in tune (stay tuned in?) with the unravelling of the Middle East. Bush’s open mike cursing was on every channel, the word sh*t always bleeped out (one commentator requested that the White House not appoint FCC chairmen who would fine them for playing the word on television that the President said through a live mike)… What a pity that Putin’s G8 picnic has to take a back seat in the media to a presidentital gaffe.
Well, you see, that’s how our president cooks up his foreign policy, and it being thin on insight and complexity these days, we take it as we can. And if that’s with a chewed up, open-mouthed, Texas cuss, then sorry, let that polite and restrained Mr. Blair turn the mike off.
That Bush thinks a phone call placed in Syria to Hezbollah can stop this thing though, where’d he get that from? Does he really think the whole world works by picking up a phone? What a pity we don’t surveill international calls, there’d be a lot of conflicts solved if we did! Condi knows better than to fly out there unless there’s progress to be made. But with Bush dissing Annan out the side of his mouth to Tony Blair, it seems that even a President who refuses to engage “states that sponsor terrorism” (not to mention terrorist states) can squash peace efforts envisioned by those who do. Most of the rest of the G8 is behind a UN intervention.
This is not as simple as war by proxy, peace by phone. Every day Lebanon’s cedar revolution is cut and logged; whether Hezbollah lose power, or Syria and Iran lose confidence, or countless more lose lives, it’s not just a phone call. We’re learning, that in spite of our power to project force, peace is much harder to win. The American way of intervening has not panned out. Turn off the mike, Tony. Chew with your mouth closed, George. Now, Europeans, how ever you have to do it, back channel, tap, type, semaphore, flash, if you have to, call, but please don’t shell your way through some crisis resolution.