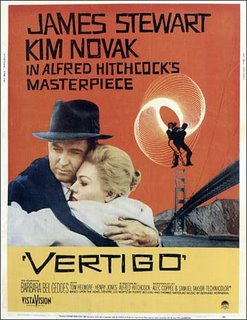 Hitchcock analysis is not wanting for contributions. But here’s one anyways. Hitchcock made crime thrillers. He was the master of the form, working out crime and suspense stories with precision and an impeccable logic. A logic that, it’s been noted, included the audience for the first time, making him also a new kind of film-maker. Think of the scene in Rear Window when Jimmy Stewart, bound by a broken leg to his wheelchair, bends over to pick something up and as he does so, misses seeing a neighbor seen by all in the audience.
Hitchcock not only used the camera to let the audience in on secrets, he used the genre also.
Where the crime per se is normally solved, this bringing the story form to resolution, Hitch’s crimes weren’t Whodunnits (he’s quoted as saying he never made a whodunnit film) Dunnitforwhoms. The thought I’ve now caught up to, then, is that Hitch in his way embedded theft within a kind of gift economy.
Hitch’s films tend to be about two possibilities for relationship: love, or partnership. Oftentimes his romantic couples form, or subtend, a detective partnership first. We get caught up in the tension between two possibilities: will they get together? Kiss kiss? And then it’s Bam! He goes and throws her off the train! Commentators have written that this ambiguity of intent, identity, purpose, and possibility is psychology rooted, for Hitch, in the ambiguity of his love relationships with women (yesmothering love, Hitch?).
Is theft not the opposite of Gift. Gifts are an object exchanged and a relationship reproduced. The proper move following a gift is a return. Reciprocity governs the gift economy, and the obligation binds people to one another. A theft has no bearing on relationships: in fact it’s about material possessions and objects so much so that victims of the crime will often complain of a sense of violation, feeling having been violated in a profoundly anonymous manner. But the theft ends there, an event whose memory may leave a lasting thirst for revenge, or not. But relationships can’t be built on thefts, say by thieves and their victims, unless perhaps things are taken back, retaken, taken back, and then, hey, it’s kind of a weird society built on long-term loans…. Hey, there’s an idea (I’m reminded here of an Eddie Izzard joke. Robin Hood is asking a man riding through (where else?) Nottingham Forest if he’s not rich, and the man replies well no, I’m comfortable, and Robin Hood retorts well that’s not going to swing, is it? I can’t steal from the moderately comfortable and give to the modestly impoverished).
The theft in Hitch is far less important than the relations among his characters, relationships which are forged by the ambiguity caused by a violence whose meaning actually produces relations. These partnerships emerge out of the scene of the crime like a spiraling staircase, each step an act of trust or faith, a gesture of hope and commitment climbing on wobbly and weakened knees, a vertiginous swoon climaxing with a fall, or is it a push, from the Church’s own mission bell tower… Crimes riding the thrilling narrative of romantic coupling, of partnership, of gestures, sacrifices, offerings forged out of uncertainty but in faith, building relationships where the key event is the taking. Modern man, that Hitch, and he saw correctly that it’s better to give than to take away.

(Oh that sounded corny. Like that bell tower in Vertigo. That bell tower was matted in. There never was a second floor in that mission. To create the effect of zooming in while pulling back, Hitch required his own lenses (vision) and a long long staircase structure (they used a model). Some things are easier modeled.)