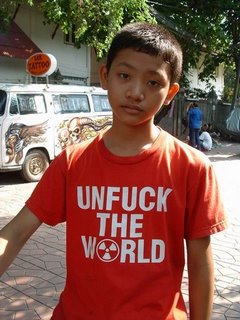 Well India’s latest missile launch wobbled its way wayward and was as off course and harmless as so many shots on goal fired this weekend by the four teams remaining in the World’s Cup, a sporting analog for power, nationhood, and respect, won by Italians and wasted by our man Zizou, the striker who’s gone back into the cold.
I toyed with the idea of a fantasy match involving French and Italian film directors. Instead, this world cup final would have been directed by Wim Wenders, written by Peter Handke, a red-carded Slobo shamefully sent off the field, a bid for national pride having been squandered by a childish tantrum and head-butt to the chest of one Italian defender named something like maserati. Our American commentator in the box fond of describing him as charging the field with a “head full of steam,” a head not so full of steam anymore, it seems. No more espresso for you, Zizou.
I slipped on a new word while enjoying an Irish coffee this weekend. Afreudance. Avoidance of people or associations having Freudian meaning.
Kim Jong Il, you little buffoon, put down those toy soldiers. Cheney, stop mocking his sandbox. Ahmadinejad, leave the party now and let the rest of your people relax. Slobo’s gone, Handke’s Yugo sits broken by the side of the road, there may be no poetry after Celan, no world cup worth drinking from, but if we’re to think the unthinkable, make it Borges, Cortazar, or Marquez. MAD stands for mutually assured destruction, and you’re all mad.
The anxiety of the goal keeper at the penalty kick was a German film, too much Wim and Vigor, and even French athletes, it seems, owe the Owens, who already 70 years ago showed the black card and the white card to be just that, markers in a game we’re all here to play.
It’s South Africa hosting the cup next time, and they’ll be showing yellow and red, apartheid’s black and white now to broadcast in hi-def color. Give us a game to watch, stars to believe in, play to be admired. The rest of you get off the pitch if you can’t sing along. And give us back the Himmel uber Berlin.