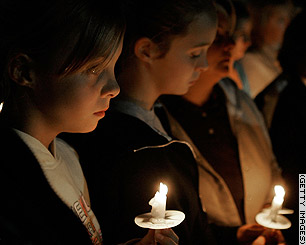 I only just heard on the news this morning that the Amish don’t keep photos. There are no pictures of the girls who were killed. (Let’s assume everyone’s telling the truth; tho if I were an Amish parent I dont think I’d want my daughter’s pic pushed onto the internet by bloodthirsty journalists, would you?)

That’s fascinating. And only moreso given the sharp clash of cultures that’s been the Pennsylvania countryside this week. Satellite dishes and trucks, cell phones and microphones, cameras and lenses and boom mikes and grips and PDAs, Treos, Crackberries, all rigged up and *functioning* in the midst of a culture that chose to tie off its electrical line and make do without electricity. Without radio. Without wireless…

In scenes shot at the scene of the crime, we’ve been shown small groups of Amish men (it’s always the fathers, sons) huddled together, obviously in prayer and contemplation, though stoically so. This is not the picture of a community ripped apart, bleeding at the eyes, wailing in grief and overcome with pain. The Amish have, instead, given the media a quite unusual media situation: calm, accepting, forgiving… No shrines to the girls, no outpouring of flowers, no hand-made signs and sendoffs.

There’d only have been an event. A loss, a crime, a grieving, a moving along….

If the media provides an observation, a culture observing itself, then this event puts as much focus on the media as it does on the crime. I’ve not seen much discussion of this. Are people asking the media to back out and leave the community to deal with this in its own way? Perhaps the wknd papers and magazines…