Skip to content
Posted on February 13, 2006 by Adrian Chan 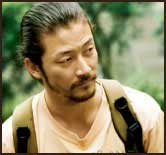 This little film has all the treatment and feel of a low-budget indie production, but it’s actually directed by well known Taiwanese director Hsiao-hsien Hou, commissioned by Japan for the 100th anniversary of Yasujiro Ozu birthday. And it’s a perfect homage to Ozu, “more Japanese” than a Japanese film could have been (notes one commentator).

Partway through this film I noticed something strange about the relations between actors. I don’t think there’s a single reaction shot in this film. Certainly no use of the shot-reaction shot technique that’s conventionally used by film makers to get across how actors feel about each other.

Shot: actor’s attention directed to another actor.
Reverse shot: other actor’s face gives away the relationship between the two.

The shot/reverse shot technique seems to work so well, I think, not so much because it’s hard to put two actors on the screen at the same time, but because we (audience) relate uniquely to the face and emotion of a single face, and it’s that–the film’s relationship to its audience through the camera, which places the audience in relation to actors on the screen, that motivates an emotional response in the viewer that’s always different with one face on screen than with two or more.

Cafe Lumiere contains no shot/reverse shot sequences. In fact the actors don’t make eye contact. And this decision, conscious or not, creates a film in which its characters are always in a scene. Even when they are alone toghether in the smallest of bookstores, we are given a scene and not a relationship.

The camera’s still disposition to scenes, urban and interior, captures a landscape of objects and places through which the trapped love of our two lead characters journey in pursuit of a way to connect. Their affections for each other play like muted horns amidst a jingle of train station announcements and contemporary piano movements, there but not together. They are like two passengers, at times on parallel trains (and this is the film’s crucial scene), traveling in the same direction but separated by the window panes (pains) through which they direct their looks in a longing to collapse the space between the tracks, able to make the journey, but not together.

Beneath the film’s unfocused care and tenderness is the story of Yoko’s adoption, her pregnancy, and her decision to repeat her own past by bringing up the child without a father. And her friend’s (non-lover’s) silent yearning, “at the edge,” as he puts it in one scene, pictured in a rendering of his own (yes the actor actually made that drawing) as a lonely fetus (perhaps crying, he notes) in an eyeball surrounded by trains and tracks, alluding of course to suicide, preoccupied with a passion for recording trains and their sounds in order to capture evidence (he notes, and does he mean, of his death, should he join his trains on the tracks?)…

This is a great little film about hesitation and the desire to overcome it, a film that leaves open the possibility of redemption and which attaches it to the younger generation, who in their innocence and freedom might stand a better chance than the bound generation that brought them into the world to begin with.