Skip to content
Posted on February 18, 2006 by Adrian Chan 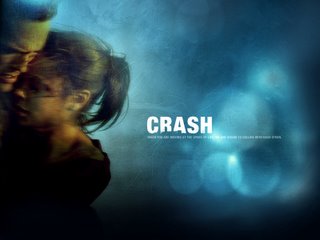 Film is an art form of action. Actors act. And react. They act on their own accord, and they react to one another. Lights, camera, action: film creates movement out of images, time out of movement, and story out of action.
The film crash is an ensemble film. It’s got many actors. But these actors crash into each other. And their actions are but gestures, revealing not a deep relationship or cosmic connection, but a choice, forced by events, for or against a complete stranger.
It might seem at times that the moral of the story in Crash is one of empathy. Or altruism. The redemption of society through individual choices and acts that might bind us together and keep society whole. And that might be the case.
But even if it is, there is in the very form of a film like Crash a sign of the times, and I mean sign in a double sense.
Crash describes the kind of society that, in its dogged insistence on the individual, has lost its humanity, its society, its wholeness. Crash says to us: this is what we have become, for we all recognize this. And in its statement, it poses the question: What, then, can we do? Anonymous encounters, strangers helping strangers–these are the elements of society when things come crashing down.
But there’s another sign here also. It’s the semiotic sign. Saussure split the sign into two, signifier (rose) and signified (love), and claimed that the relationship of signifer to signified is arbitrary. Meaning is achieved in the relations between terms in a system, not between the sign and what it signifies. A dandelion could have come to signify love just as easily as a rose. Nothing intrinsic about the rose makes it a vehicle for the concept of love.
In human communication, though, we use language, which is a system more complex than the system of signs. Action, too, does more than just indicate, or sign, its meaning. Gestures are signs. And it’s gestures that make the actions in the film Crash: signs of humanity, genuflections, piling up one upon the other in an effort perhaps to redeem the crash, if we only each make a life-saving choice, show one sign of hope, or make one attempt at a rescue.
Such choices, were we all like the actors in Crash, would save us. We could assume that in each act, a gesture lay hidden. And in each gesture, a sign of hope. And without a word, or a thought, or any real change to the system, that crash might bring us together.

In case it wasn’t clear, Crash is a film very worth watching.
Films that share a similar form are those of Kieslowski, Code Unknown, Beautiful People, Shortcuts.