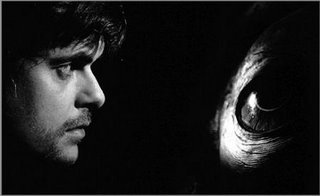 “The first is Hamlet’s great formula, ‘The time is out of joint.’ Time is out of joint, time is unhinged. The hinges are the axis around which the door turns. Cardo, in Latin, designates the subordination of time to the cardinal points through which the periodical movements that it measures pass. As long as time remains on its hinges, it is subordinate to movement: it is the measure of movement, interval or number. This was the view of ancient philosophy. But time out of joint signifies the reversal of the movement-time relationship. It is now movement which is subordinate to time. Everything changes, including movement. We move from one labyrinth to another. The labyrinth is no longer a circle, or a spiral which would translate its complications, but a thread, a straight line, all the more mysterious for being simple, inexorable as Borges says, ‘the labyrinth which is composed of a single straight line, and which is indivisible, incessant.’ Time is no longer related to the movement which it measures, but movement is related to the time which conditions it: this is the first great Kantian reversal in the Critique of Pure Reason.” Gilles Deleuze, Preface “On four poetic formulas which might summarize the Kantian philosophy”, Kant’s Critical Philosophy, vii.
And might not the last sentence of this first paragraph in Deleuze’s brilliant and brief study of Kant, be a statement about film?

Ever since film began to un-spool its own version of time at 24 frames per second, synthesizing it through simple optical illusion and the narrative innovations of montage (editing), film-makers have enjoyed the magic of imaginary time. And on occasion, a film-maker arrives who has an entirely different sense of time, a different breath, a gait out of step with the rhythms of time common to the moving picture.
Bela Tarr is one of those film-makers. And while he is often compared with the Russian master Andrei Tarkovsky (also a time-maker), Bela Tarr’s temporalities are material, where Tarkovsky’s are often symbolic and visual.
Asked once why the scene of villagers marching towards the town square in Werckmeister Harmonies lasted as long as it did, the director answered, simply, “that’s how long it took to get there.”
As simple as this is for an answer, there is something else at work in Tarr’s camera work. Werckmeister Harmonies, at over 2 hours, contains only 39 shots. It took the director a day to edit together. But the effect of storytelling in so few shots is not just a reduction to the straightforward and direct capture of time. He is, I think, making film think with the body; and it is the body which, set in motion, resides in time.
Werckmeister Harmonies opens with a shot of town drunks in a bar enacting the orbits of the planets. A lone bulb hangs from the ceiling as the men spin and tumble slowly about the room, their bodies taking up heavenly relations. And this is what they do throughout the rest of the film: bodies move and are moved, they plod along empty roads by night; they gather in tedious crowds; they assemble for a march on the town square; they pillage a hospital; they walk adjacent to one another (there is a two minute tracking shot for which the director laid down over 300m of rail). And as the villagers in Werckmeister Harmonies are set in motion, so too is the viewer. Tarr makes the viewer think his film, and live its time, with him. I have watched as friends adjust their seats during many a shot, their own physicality coming under the spell of Tarr’s temporality.
Can bodies think? Can minds think without bodies? Can we have social relations as heavenly as the relations among the heavenly bodies? Tarr’s opening shot, in which we found the drunks losing themselves to vertiginal rotations, culminates with an eclipse. Tarr shows us an eclipse, an eclipse in the heavens, staged by village drunks. Light, obscured, is not darkness, as time, out of joint, is not motion.