Skip to content
Posted on January 18, 2007 by Adrian Chan 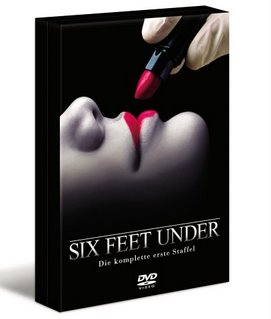 I must have been six feet under myself, to have avoided this show for so long. Either I wasn’t listening or I just didn’t get it. After watching the pilot last night (Series one, episode one), I sunk into the couch and played the rest of the first disc’s episodes straight through. I wouldn’t normally go out on a limb and post on a show this early into watching it, but its beginning really seems to set up an emotional logic that will serve the director’s purposes for the show’s duration that I’m going to climb out there and see what comes to mind.

In spite of its title, and its gimmick, the show is not about death. Yes, each episode kicks off when somebody kicks off (the big one; aka bites the dust, meets his maker, buys the farm up in the sky), but these are just dead people, not people who die. Since we’re given their death at the beginning of an episode, we’re not emotionally invested in what’s happened to them. Instead, we’ll become emotionally invested in what happens to the family as the death creates consequences requiring the family members’ attention.

So it’s not really about death, it’s about an afterlife. In fact the family’s been given a second chance by the death of their father (I’m not spoiling anything here). His death is a gift, sacrifice perhaps so that in his absence, members of the family might consider their own lives seriously for the first time. Each of the family members is eccentric in his or her own right. This tells us we’re watching HBO. Characters, for being eccentric, will each have a greater range of action and reaction for the reason that they’re quirky. But in many other respects, the show is conservative.

Though surrounded by death, the father’s death gives the family a second shot at being a family. The first family was built on death, literally on the repression that bound a family to support a father’s funereal existence. To individual family members, the family house was a funeral home. They were each living out a death sentence of sorts, wether by maintaining secrets, keeping the closet door locked, by lying about affairs, by struggling against conformity and family obligation while trying to be different.. In other words, the usual family dynamics!

If what it took was for the father to die in order for this particular family home to confront its deathly service, then so be it, but it’s a TV show. What makes this second life interesting is that we’re given a family of idiosyncratic individuals. They’re going to repair and remake the family on their own terms. Isn’t this the blueprint of the socially conservative, or hopeful indie? That conventional social organization won’t get us there; but individualism will. And individualism can rescue dying social institutions after all. We’ll each have to make our own choices, but if we’re true to ourselves and honest with each other, it can be done. The recent hit “Little Miss Sunshine” followed the same line: a VW bus, quirky in its own right with a clutch gone bad and failing horn, propels a family barely contained across hundreds of miles of imminent disaster to support the hopeless but love-able dream of its youngest family spirit.

The genre is optimistic, probably as unrealistic as any other family drama, but at least optimistic. Not to mention just hilarious. So looking forward to the rest!