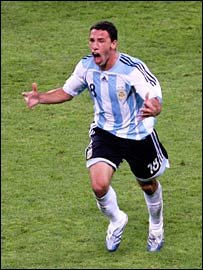 John Tierney writes today in the NY Times that soccer’s been no fun to watch because it lacks the excitement of the spectator games we’re accustomed to (that’s the gist of if, tho he gets there by a weird comparison to Greek tragedy and war, as if war were a spectator sport, or a good example of an event made of lights, cameras, and action (hey there’s a thought, a war made for tv…))…

“Foreigners complain about the continual delays in football and baseball games, but American couch potatoes savor the suspense as well as the chance to see instant replays and debate the next move. They love football above all because it’s the perfect game for armchair warriors: the action stops so generals can rearrange defenses and decide whether to order a flanking maneuver or an artillery strike.

With American sports, you see tight close-ups of individual mini-dramas like the center driving to the hoop, the pitcher dueling the batter, the fullback breaking through the line. With soccer, the action is so diffuse that it doesn’t fit on the screen, even when the camera is showing the usual panoramic shot featuring players the size of dust mites.”

It’s true that games can be boring to watch. But the reason is not that the game itself is boring. It’s that the broadcast production is boring.

Just listen to American commentators during Cup matches. It’s not that they don’t know the players (many of them do); it’s that their commentary is “about” the game. It’s not to the game, or in the game. Spanish channel commentary beats ours because it’s a soundtrack. It adds to the game, fleshing out the image just as a movie score does, providing pitch, speed, rhythm, intensity, and emotional variation.

Our sporting games are produced for the armchair. Commentators speak as they imagine armchair quarterbacks would speak amongst friends, and vice versa. Observation is the activity. Now whether this represents a sad state of affairs, advanced media production, good marketing and the rise of ESPN, or a trend towards ever greater and faster volumes of news (doubling up the game with an additional layer of commentary means you have two activities to attend to: the game itself or the back and forth of commentators), depends on your view of the mass media and its relationship to reality.

I miss Howard Cosell. And Jackie Stewart. But I’ll be watching the games. In public.