I love this film. I dont know how many times I’ve seen it, and I still love it.

When you’ve seen enough Kieslowski, you know that the seemingly random meetings and connections between people reveal a filmmaker obsessed with his art, craft, and in particular, with his precision. It’s been said that his montage, or editing techniques, could reveal plot elements more quickly than almost anybody else. In Red, we see a woman’s boyfriend purchase a pack of cigarettes, Marlboros. We see Valentin in the bowling alley. And after watching her bowl, the camera tracks left to reveal a broken beer glass and crumpled pack of cigarettes. Instantaneously we know that he has broken up with his girlfriend. (It’s a bit more obvious than it might seem here, of course!)

In his use of the camera as a way of revealing the story to the audience, then, Kieslowski is not unlike Hitchcock, who also revealed information to his audiences behind his characters’ backs (we see Jimmy Stewart’s neighbor leave the apartment in Rear Window, while Jimmy is momentarily looking the other way). What Hitchcock did, in this way, was create thrillers in which the audience has to decode the crime’s logic. As Hitchcock used to say, he never made Whodunnit films. We know who dun it sometimes at the very beginning. His films involve a logical third, and where the filmic third (camera, actor being the usual relationship) is the audience, the logical third is the person for whom the crime was committed. His films are built around this question, not the question of who did the crime. For whom was the crime committed.

Kieslowski is a reverse Hitchcock. Rather than find out what will happen, we find out what has happened. Kieslowski plants repeating places, camera angles, objects, intersections in his films so that as a film progresses, we realize that indeed we have seen this before, and they were already connected… The connection was latent, as if destined, and “suspense” is the time we wait for this revelation to unfold, rather than for an action to resolve the initial crime—the convention of suspense films. Might we say “subspense?” Logically, Kieslowski also works in triads, or thirds. But this time, the benefactor (for whom was it done) is unintended. The logic is meant to be one of serendipity, chance, magic, luck… For every chance encounter between two people, there is a third person who will benefit.

A force of goodwill, or love, operates in Kieslowski’s universe. A samaritan’s helping hand (the old women so often seen recycling bottles; the Jesus is your witness who appears in each of the decalogues… there is a witness, your acts will be seen, we are not alone, your actions are not all in your power). We could say that Kieslowski makes “gift films,” not crime films; and that his domain is “subspents” because the currency of love spent by his actors subsists and benefits a third… The gift is an additive logic, and when two exchange, a third is created. 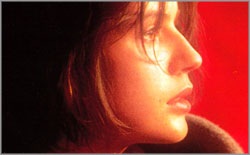