Skip to content
Posted on January 3, 2006 by Adrian Chan 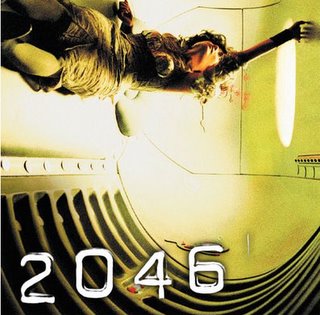 I tried to but could not tell which scenes were filmed by the cinemato- graphers hired after Christopher Doyle left the project. Kudos to the new guys. Though I hope we see Doyle/Wai collaborations in the future… 2046 is indeed a beautiful film, and its rhythm is like a tango.

But there was something unsettling to the story in 2046, and it may have been WKW’s habit of winging it, scriptless and all. I’ve been looking forward to it for a long time, and it just didn’t catch me the way Wong Kar Wai’s previous films have. The crux of Tony Leung’s motivation is the meaning and memory of the (unconsummated) relationship he had in In the Mood for Love. Haunted by first love, and unable to get back there in his later relationships, he’s become jaded and aloof. But 2046 is all about these new loves, and it’s WKW’s talent to produce a romantic sensibility in even the most broken of courtships, as he has done in all his films. Strangely, there doesn’t seem to be much of a difference between In the Mood for Love and 2046, insofar as love is unattainable in each. What ought to have been a difference is a repetition, for what we are shown is the distance, tension-filled though it may be, between lovers, and distance is the same no matter what it comes out of.

Perhaps love as passion makes for a less interesting film when shown as a relationship. Perhaps the genre needs to keep its lovers apart so that viewers are forced to think their union and desire their consummation. I don’t know that 2046 works, though, if we have to hold its predecessor in mind while watching it. Love is not a memory, it’s a longing, and as such is always the glue that binds past and future. A film has to give us its characters in toto, not in part. Wai’s ability to create a fabric and consistency patches over the broken relations his characters in 2046 are supposed to be having.