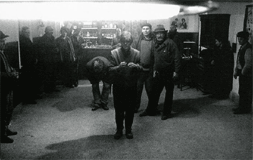 Amazed once again at what Tarr accomplishes in just 37 shots…. A few more things came to mind while watching Werckmeister Harmonies again last night. It hadnt struck me till last night that the perfect tuning of the piano is told here in the form of ethnic cleansing….

Circle of Fifths was Pythagoras’ philosophy of music,
echoed in the form, meaning, and motion of the heavenly spheres,
which open the film (Janos’ demonstration, or illustration, using village drunks as the heavenly bodies, their shuffling feet audible AS IF they were music),
an eclipse is enacted in their local theatre,
a theatre known historically for absurdism,
and after which a foreshadowing shadow is cast by an arriving moving truck, at night, film noir like, on a wall
…
György responds to Tunde’s appeal by saying “let’s not make that mistake a second time,” referring to the perfection of the musical system as well as to ethnic cleansing,
the whale is a silent witness, as is Janos in the hospital,
and if you ask, why a whale, surely the answer must be absurd (was there not a tale about elephants that dealt also with political change?)
the absence of their screams and cries during the hospital pogrom makes their pain sound even louder,
as Janos runs down a traintrack he is found by a helicopter (most modern of vehicles)