Skip to content
Posted on February 7, 2007 by Adrian Chan 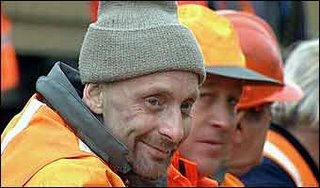 The Navigators by Ken Loach

Ken Loach directs a profoundly moving and grounded segment in the film Tickets. After seeing that I needed to see more. Here’s a director somewhat like Mike Leigh, or perhaps the Dardennes brothers, but his cinema verite is wholly thematic and topical, if not political also. The Navigators is told in doc style and features the travails or railmen in the UK, laying track while privatization rolls right over them. Loach is keen on telling a somewhat Marxist tale, but he allows it all to manifest itself in the dialog, the situations, events, and conflicts that form the fabric of his characters’ relationships. The message, to the degree that it’s there, is unnecessary.

But it’s there. And this is what makes the film compelling. Loach reveals the social conflict, the crushing and impersonal demands of the privatization of a small band of railway maintenance workers, through the confrontations it creates among friends. He shows us how privatization results in work that is now farther from its origins, perhaps more profitable but more dangerous and less effective than it was in its more pure state. It’s like social relationships in the age of their mechanical reproduction (Walter Benjamin).

What Loach films is true. Authentic. It gains in sincerity for what it jettisons in style. The Navigators was utterly engrossing. I highly recommend it. (then see Tickets)