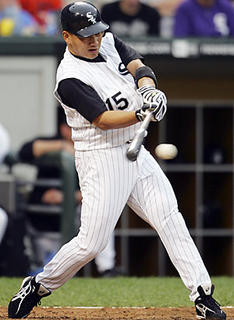 Wender’s called it “the anxiety of the goal keeper before the penalty kick.” I think that might be the equivalent, in the soccer world, of the suspense that baseball stretches into an entire game form.

I used to think the sport was boring, but that’s when I thought it was a game comprised of a lot of waiting for very little to happen. (This can be true of soccer also, but in soccer the players expend a great deal of effort in the meantime.)

Baseball actually hews to the filmic convention required for the creation of a good suspense picture: stretch out the time between announcing what the audience anticipates might happen, and its actually happening. The action, so to speak, in a ballgame, moves at 90 mph and takes a matter of seconds. The game is enjoyable because of the tension built up in the fan’s mind and body as his organs seize and hold for the release.

The action in chess, by the way, also involves a lot of waiting. But unlike the ball sport, the moves played in chess do not add to the game play. Pieces are neither hurled nor batted.

One might say that a game that can be told in print, translated into its conceptual game play, is a game of strategy. A game played in moves, on the other hand, is a game of activity.

Nay, baseball is not boring after all.