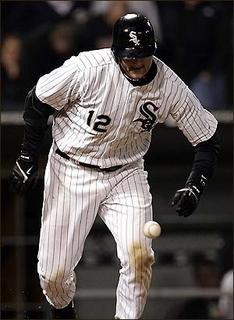 Last night’s ninth inning call on White Sox hitter A.J. Pierzynski, with two outs in the can, allowing him to take first base when he’d been ruled struck out, and leading ultimately to a White Sox win, fell on Angels fans like the period at the end of this sentence.

In game play sports (see my last posting), the rules of the game are enforced by players. They’re called umpires, but their judgments are as subject to the imprecision and bias of any human observer. Baseball, unlike football, doesn’t use instant replay.

The interactionist Erving Goffman observed the difference between strict rules of construction or game play (the hard and fast rules) and the softer contextual principles required in any system that involves meanings produced live. The grammar that articulates the production of meaning through sentences can’t arbitrate the meaning of a non-grammatical sentence; interpretation must then be referred to a higher system:

“And just as system constraints will always condition how talk is managed, so, too, will ritual ones. Observe that unlike grammatical constraints, system and ritual ones open up the possibility of corrective action as part of these very constraints. Grammars do not have rules for managing what happens when rules are broken.”

And so too, with the rules that govern games. If the grammar man is an umpire whose line of sight on the ball may be obscured from time to time, and who must respond to events in real time, higher orders must contain his independence.
This is how many fans felt as the game wound up last night: upset at violation of a rule on the order of the game itself, a rule higher than just the grammar of the game, and one that is tacit, unspoken and unwritten, and thus of the highest order: ritual.

Had the man at bat not run for first base, the ambiguity of the situation (it was unclear whether or not he actually called “out” on the batter; the batter thought the pitch hit the dirt and that since the catcher hadn’t tagged him, he could legally run for first base) wouldnt have come into question. The umpire allowed his position as grammar man to be compromised by the (obviously biased) hitter’s running gamble. And now, with the Angels leaving the field thinking they had three outs and the game in the bag, the umpire stood by the hitter’s interpretation: he had not been called out, and so was now safe at first base.

But every fan of the game recognizes the impropriety, from a playoff series perspective, of making such a call in the ninth, with the game on the line. His decision threatened the very integrity of the series; an umpiring move by one man poisoned the win, letting down all whose expectations of the world series selection process are set high.

In the world of game play, as in other domains in which grammar governs what is said, but not the sincerity, or normativity, or accuracy of what is said, other constraints govern the player and the game play.

In the ninth paragraph, with that much at stake, would it be fair to write that all I’ve written is a joke? Even here, because blogging ought to be sincere, you’e entitled to a proper ending. Seriously.