Skip to content
Posted on December 7, 2005 by Adrian Chan 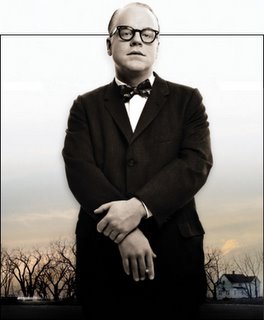 What a splendid film. This film is perfectly structured as a story of friendship, trust, and possibly love (left open to the viewer’s perception, of course) that unfolds in two parallel series. The decision to write this story in parallel was brilliant, for the commonalities in each character’s life are the basis for the question Capote addressed in his book: the encounter of two layers of society, the bourgeois and the seedy underbelly, an encounter that results in violence for no apparent reason.

Capote admits that he feels as if the killer his novel circles around is like a brother to him. And that their lives could have started in the same house, the criminally-inclined and murderous brother leaving through the backdoor, he himself through the front (and into the limelight of high-society hobnobbing).

The parallel construction works perfectly because this is a film, after all, about the writing of a novel. While it’s a crime novel, the crime under investigation in book is doubled up by the criminal’s execution. A criminal under study by an author is himself subjected to a crime–one that unites the two men, again, in a familial logic.

Violence, random and senseless violence in particular, gets Capote’s attention as a somehow emblematic and symbolic microcosm of what he sees occurring in society at large. He wants to write about the brutal murder of a countryside family because there must be something in a criminal’s life that explains how such a thing can occur. An explanation for the rip and tear in society’s fabric that makes sense…

Capote’s own life will lead him, too, to a crime. His writing of the crime, his writing of the criminal, will unfold in time as a relationship, virtual and actual, between him and the criminal. And it, too, will terminate in the violent hanging that permits Capote to finally conclude his novel and unleash its success on his own tragic lifeline. It’s the last thing he writes, because it’s a story written in blood, and the tears he sheds over this prayer answered are indeed more painful than those shed over unanswered prayers.

Capote knows that he let the criminal down, sold him out for the sake of a story, and that in so doing he sold his soul. What then to distinguish him from the criminal whose brutal act was, too, the unexplained choice made out of passion and defensiveness, pride and prejudice?

Two men, two paths, two crimes, one logic. A logic of violence to replace the logic of a relationship. Termination of the series.