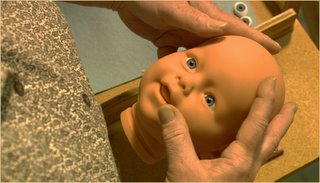 Soderburgh’s recent release, the first out on dvd and in the theaters at the same time, is well worth its short 70 odd minutes of viewing time. Filmed in a week and with a non-professional cast, Bubble is the first of six planned HD releases. But the film’s low budget and speedy production are what make this film so watchable. The camera’s still, and dialog is simple. There are no events but one, there are no actions but one. Here emotion is in check, tension is built on suspension, absence, and a sense of waiting.
Soderburgh says in his commentary that he’d wanted to do a film on a triangle of people gone wrong. But the triangle’s only one element, as it’s a triangle that’s never more than a week old. Relationships between the actors break too quickly for us to find out what kind of triangle they might have had together. Their bubble bursts, and its pop resounds as other bubbles pop with it. For it’s really just one actor who’s own bubble bursts, and with her bubble, the bubble of a triangle, and the bubble of a town, and the bubble of a way of life, a life of doll-making, and tedious, no-way-out Mcjobbing.
Bubbles, like triangles, have three elements: surface, tension, and emptiness. A film called bubble can only do one thing, and that is burst. I hope this little gem of a film bursts into our consiousness in a big way.

You’ve been living inside a bubble (an adaptation of Pop, or is it cold play)

You can’t think ‘less you know who you’re talking to
Never closer but always drifting apart
You’ve been living in a bubble
And the bubble’s living you
Actors gone and stage now empty
The silence loud, your play gone cold
Too late to burst

2 Replies to “Bubble in a bubble, and how bubbles stick together till they burst”