Skip to content
Posted on December 20, 2005 by Adrian Chan 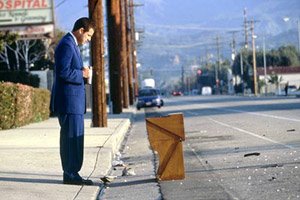 Paul Thomas Anderson’s Punch Drunk Love opens with his signature move: juxtaposition. Adam Sandler, handling a nice Nissan coffee mug in the early morning light on a backstreet in LA, watches as a speeding car comes carooming towards him, flips, flips again, and skids offscreen. And then in place of what ought to follow (continuity with the car accident), a cab appears, stops, and deposits an electric organ. It’s the instrument with which he will learn the harmonies of love, and it arrives on the heels of trauma.

The scene, strictly visually, is reminiscent of Jane Campion’s piano on the beach, or of Herzog’s record player aboard the steamer headed up the Amazon in Fitzcarraldo. There is music going on here. It’s no secret that Punch Drunk Love is a tone poem. What draws me to PTA’s visual ear is his interest in translation. He knows that sound reaches the heart before the image (it is the first sense that comes to mind, in the womb, as we hear our mothers’ heartbeat). He knows we have the uncanny ability to name the composer behind a riff played in the style of a modern rock artist but performed by a harmonica trio (as in Magnolia). He knows the operatic line (the group song sung by each of Magnolia’s ensemble cast) against harmonic backgrounds (each of Magnolia’s cast is struggling with the same song, the same hurt, and together they are a story in the same key). As did Paul Klee, who attempted to paint music by rendering an operatic line over color fields. The two Pauls have much in common. Perhaps, like Nabokov, they are synesthetic? Either way, PTA’s style is “affective” and his songlines, like those of the Aborigines, are maps to (emotional) territory.

He was right in his choice of Sandler, whose performance is a musical score in itself. And Emily Watson can do no wrong (she’s one of our finest, a face of infinite depth). The two play awkward music, but in their search for the key to their love, they strike notes and find resonating harmonies. The key to their love is the key in which they play, the chord, the chord that binds. If I were to hazard a guess at PTA’s idea, it would be that he knows that in sound you can add and combine, but not obscure or remove. Sound is the medium most suitable to the dance that is the love of a couple. Emotions together, adding to one another, always responding to one another, always and immediately aware of a note off-key. Music is the fragile, fleeting, signature of human relationships. We can get lost in the perfection of image, the celebrity of the gaze, but we don’t close the gap until we play together.

There are ways to read PTA. But the best way to read him is to listen.

One Reply to “Paul Thomas Anderson, artist of the visual tone metaphor”