Skip to content
Posted on January 16, 2007 by Adrian Chan 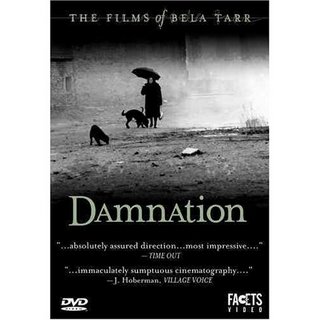 Bela Tarr’s masterpiece Satantango has been released on dvd finally. My copy hasn’t yet arrived, but I’ve seen this 7 and a half hour work of art three times. I’m anticipating a Bela Tarr fest the moment it shows up. Until then, readers have his Damnation and Werckmeister Harmonies to enjoy (his earlier films are excellent, but precede the visual grace he has demonstrated over the past 15 years or so).

Bela Tarr’s techniques as a film maker leave no doubt as to his involvement in creating a new kind of time and temporality. For a film to have only 37 or so cuts, each scene running towards the edge of the kodak 11 minute limit (“Tarr’s go to eleven”), meant that Tarr (and his wife, as editor) were able to edit the film in a single morning (according to statement he made at the PFA, Berkeley, as I remember it; thus proving that Tarr is given to some amount of pride and exaggeration). Tarr’s blind disregard for montage however is the result of his vision of time. Or better, proximity.

Proximity is a relation of time as well as space, involving a relation of near/far in both dimensions. (It is a psychological relation too, but less so in Tarr’s work). We tend to think of close ups as putting us in close proximity, but in fact a close up is normally used in a reaction shot. We’re not so much in close proximity as it is suggested that another actor is. If we’re given a close up of Cary Grant, then Ingrid Bergman, back to Grant, back to Bergman (you get the picture), there’s no confusion of who’s in close proximity to Ingrid. It’s certainly not us, the audience. And for the most obvious but yet counter-intuitive reason there could be: the image. A close up is an image that stands in the way of the audience falling into a close relationship to the film. The image itself becomes a barrier to proximity, and the closer the shot, the more likely our reaction is to pull back.

There’s a much simpler way of achieving proximity, and Bela Tarr’s films provide a rich case study in it: it is through sound. Sound reaches us along a different axis, one that integrates and embraces, one that involves and seduces. The image involves the eye in looking, and in selecting what it looks at, the “at” here being operative. Sound, however, is a field and we do not use our ears to place ourselves within it so much as we are first immersed within it involuntarily. Hearing cannot be closed down. Our hearing is our grounding, is receptive. Sight is directive and focusing. And I am not suggesting that we don’t listen, or pick out sounds. When we do, though, it is because a sound is heard, and stands out from its field. Our hearing cannot focus on a particular sound until it has first become noticeable. Sight operates with greater flexibility.

Our relation to images is made of distance, near and far being its degrees (Orson Welles worked with this spectacularly). Tarr instead works with sound, and indeed it allows him to abandon the cut, for in sound he can create rhythm within the shot. Thus his shots often involve repetitive sounds: sheets of rain, footfalls and footsteps, from the urgent approach to the the shuffling feet of drunks attempting some kind of coordinated dance, the plodding of a long trek, the clack clack of a long and un-ending line of coal buckets running overhead. In fact, in a key sequence in Werckmeister Harmonies in which a hospital is ransacked and its patients dragged from their beds, the shot procedes without sound. Tarr knows that the audience’s role in providing the sounds on their own will make it louder, and more disturbing, than if he were to put them in the film.

Tarr’s time image, to refer now to Gilles Deleuze (Cinema 2: The Time Image) is constructed directly. Tarr’s film makes time through camera movement and the through the repetitive motion of elements captured in the scene, and through repeating sounds: rain, buckets of coal, footsteps, wind, organ playing, machines, bars… The opening scene of Damnation is a long and subtle zoom and tracking shot of a coal tram running endlessly, seen through a window. The movement and sound of the buckets of coal, each adding to the monotony of work and evoking the slog of labor (in a communist regime, but global nonetheless), constructs a tedious rhythm within the scene. The slow motion of the camera tracking the window gives us a subject’s contemplation: time without agency, time without a thought, contemplative subjectivity beholding the repetition of a life.

The use of sound here echoes a tracking shot in Tarkovsky’s Stalker, in which the Poet, the Guide, and the Scientist journey into the Zone on a mechanized rail car, tak-tak, tak-tak, tak-tak. The sound there is like a mantra, fading into the background as the soundtrack comes to the fore: three wise men on their pilgrimage to the Zone, where dreams may come true if they act in accord with the Zone’s law.

But Tarr’s cinematic hearing produces strange effects. Sounds do not recede or fade but remain in focus. As characters walk into the distance, the gravelly crunch of their footfalls remains present, and with their changing distance, sound remains the same, just as loud, just as near. (I asked Bela Tarr if he miked his actors’ ankles, and he acknowledged using wireless mikes but wouldn’t reveal more than the wry smile that is the director’s conceit — to show but not to reveal.) Orson Welles used a visual technique in his Citizen Kane that bears analogy to Tarr’s use of sound. In Citizen Kane, Welles deployed specially-made lenses to keep foreground and background in focus, providing for a cinematic version of theatrical perspectival distortions — imagine set designs built out of proportion to achieve depth). They allowed him to create scenes in which the physical and perspectival relation between the foreground actor and background actor were given depth of field, both actors remaining in the frame and both still in focus, the background actor however being small and appearing to shrink in power and prominence. Welles’ visual depth of field enabled him to convey the psychology of each actor to the other, and also each actor him or herself, in one field of proximity. (Kane and his wife each appear, in different scenes, framed within or below a fireplace or window, weakened personally, and under threat socially.)

Through use of sound whose intensity remains unchanging even when the camera is moving, or its actors are moving (again, because the microphones are often on the actors, not with the camera), Tarr creates a Cinema of Proximity. The audience is brought close to the film through hearing, and hearing is always only our own. There is no displacement, as there is with the cinematic image. Where the image gives us a scene, sound places us within it. This may reveal one of the greatest misunderstandings of film (discounting of course silent film): to be “within” a cinematic scene would involve possibilities of movement; this being of course impossible, film-makers use sound to involve us. And indeed, any good film-maker will defend the importance of his or her soundtracks and mimetic sounds as a means of moving the story along, varying its emotional tone, cuing the audience into what’s happening, what’s about to happen, or what just happened. (Television soap operas are designed to be “watchable” when viewers are off in the kitchen: just hearing their dialogue and unsubtle musical cues is enough to trigger a sprint back into the living room to catch a critical moment just in time).

I was tempted at first to think of Bela Tarr’s film as time cinema, along the lines of Andrei Tarkovsky. But the more I think about it, the more it becomes clear that Tarr has done something entirely different. The two directors have in common a love of the long take, and of almost imperceptible camera movement, whether tracking shot or zoom shots. But where Tarkovsky creates scenes of exquisite aesthetic beauty, visually suggestive of artistic concepts and ideas, thought-imagery that lifts us and in encountering these scenes, demands a thoughtful reaction from us, Tarr is much closer, and proximate, to the ground, is in our heads, is pulling us along with movement, as if we were tracking the shot, as if we were there, aware, perceptive, but also captive. I don’t suspect that Bela Tarr watches too many films; I don’t suspect that he thinks that hard about what he is doing. That simply wouldn’t be his style. And there’s no need, after all, to think about being there if you are already there.