Skip to content
Posted on January 17, 2007 by Adrian Chan 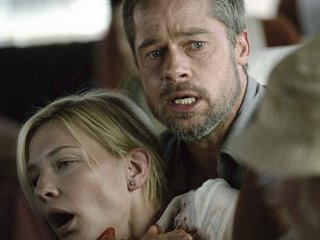 Gun barrels and bullets may be a blast to many American film-makers, but “foreign film-makers” find them to be riddled with cliche and only limited opportunities. At least how the story goes, or is often told. But Inarritu’s Golden Globe success with Babel tells a different story, in other tongues, putting gun barrels and bullets to service as a means opening up the field rather than setting it off to run its natural course.

Guns, of course, are an excellent match for film. They execute story lines and create action at the same time. When fired, a bullet may drop a man whose pursuit has held the audience in strangely -posed pauses, popcorn so ever close to the mouth, but not yet in, because the logic of the Western, like the logic of popcorn, requires that the bad man drop before the rest of us can enjoy our (now doubly pleasurable for having acquired a guilty complicity) popcorn; the popcorn itself a strangely historic nod to the genre, what with tall stalks of corn on fields, sunlit and fertile, a field of dreams if not days of heaven, the success story of a civilized and settled western territory but for the ominous threshing promised by an off-screen and future reaper… a grim reminder that the children of the corn may eat now, but pop tomorrow… Popcorn placed into mouths, and it’s never just one but it must be several, enough that there are stakes involved each time, enough that simply attempting to get it into our mouths while anticipating, like the rest of the crowded theater, the pop of the gun, and the bad man’s fall, that will release own own trigger elbow so that we and numerous others might unleash a hail of falling kernels and puffy targets made.

Gun barrels and bullets might double up action, even involve the audience directly in the production of entertainment from something horrible and terrifying (namely the threat of bad men, and death). But there is more, of course, to the genre than just lock n load (though it is true that this statement may not always apply).

Guns and bullets may execute justice, but they don’t make its case. Guns make sense if fired at the right person, for the right reason. A bad man dropped creates a relief in tension only if we know the bad man is a bad man, that he has done bad things, and that the man who shoots him is the right man for the job. In fact, we prefer to let our criminals escape from jail in order that we can see them hunted down and finally killed by the men they pissed off in the first place; we prefer that even to the courtroom drama of preparatory statements, lawyers interrupted mid-sentence and mid-stride by objections launched from on high, judges and juries, a reflection of the intrinsic freedom invested in the political system so uniquely rendered in examples of democracy such as American Idol and captured occasionally on CSpan, again poised and ready to utter that phrase whose terminal authority becomes a release with the simple addition of the prefix “Not”…

Guilt and guns, it is, perhaps, more than it is bullets and guns. Or they might all share a connecting line, and a trajectory if you will: righting a wrong, rendering justice. Without guilt, there is no morality (suggested); without morality, no moral. Guilt creates the possibility of justice, justice, the possibility of the holster (enforcement).

This cinematic field is strong and will always be strong, for its logic is as simple as it gets, and clear at the same time. The crime is defined by the social body against which it is committed, which by Biblical reasoning is entitled to demand justice, if not also mete out a bit of punishment, too. Contemporary action films still have the western embedded within them, borrowing and extending the chilling, thrilling and the harrowing, not unlike the journalistic practice as deployed during wartime military campaigns (notably during the campaign bits, less so during the clear, hold, and gradually lose control bits). These days we still have guys with rifles on rooftops overlooking main street, checking the time, and waiting for the two men mortally and philosophically, if not also morally opposed, to face off against one another. These days men on rooftops tend to offer numerous additional Guns n Ammo product placement opportunities, what with the varieties of caliber, sights, infra-red targeting (did you know those beams show up if you’re using night vision goggles, while the poor target has no idea his torso has become a momentary display of sol et lumiere dancing spots of red light, fireworks of course imminent…), but this is just a cliche’d way of layering the Western with technical progress (an achievement in its own right, for the Western chapter of American history was brought to a close by the arrival of industry and practitioners of the law).

Inarritu, in Babel, was aware of all of this, though he may not have thought about it in this way. His stripped-down, high caliber gun is a Soviet issue commonly used to execute territorial justice in the highlands of Central Asian republics. In this case it is fired, however, for no good reason, and at nobody in particular. The violence has no logic. It is in fact illogical, for it is arbitrary. This is Inarritu’s style, and it’s a style common to relational films—films in which social relations are thematized by or through random acts of senseless violence, beauty, or both. Crash, too, and Hustle and Flow, not to mention Capote, each used this theme. So, too, have Michael Haneke’s films (though not always involving gun barrels and bullets); the Dardenne brothers, Gus Van Sant’s Elephant, and countless other films which, for the past ten or fifteen years, have produced a genre of relational film along many different lines and variations.

Inarritu, in Babel, plays with the notion of causality by pursuing the question of the gun’s owner, and that owner’s personal story, in an attempt to pose the Why question (which must be addressed because the violence has no proximate cause). He suggests in this way that in an interdependent world, local violence may have global causes and consequences. Arms trade is of course the topic here, though presented without the apparatus of gun runners, organized crime, internationalized detective work, and so on (that would be Bond). But as we know, it’s not just guns that kill people. So a social logic appears, organizing relations among those involved through choices and acts that are good or bad, right, and wrong (the bus passengers, the embassy, the families, the press), and the reaction shots to the random (gun)shot now appear against backdrops that each provide their own degree of sense and organization. For what is or would be the correct thing to do, if as is the case in the film, we must have some compassion for those who committed the accidental crime? What do we do, what is the right thing to choose, what is the appropriate response or retaliation, if conditions themselves pulled the trigger, if the shot fired was a social shot, not a bad man’s shot? If the gun belonged neither to the cops regime nor the robbers regime, but to an animal hunter’s regime? If we cannot use the logic of the gun because it was not that kind of gun, not that kind of shot, is the violence it has started a violence we can reverse?

Films about social relations work by destabilizing fields in which simple cliches of justice, punishment, retribution, pursuit, and so on must be reassembled by acts of a different order. In Crash it was personal redemption by act of kindness (thus healing the social). In Capote, an author investigating a terrible and senseless crime repeats the crime by sending his man to the gallows (for the sake of good writing). In Cache, the threat of violence against a French television personality recalls a forgotten crime against Algerians, redoubled in a family’s own complicitness, and explicated by personal forgetting, rage, and resentment. And there are numerous others.

Films are set up around a shot and reaction shot. The question of a response, which is to say the organization of a cinematic narrative, depends on the intentions and motives of the opening shot/shooter. Babel, though it risks losing its connecting threads at times, successfully raises the question and then presents an even more compelling response, by suggesting, I think, that it’s not just in making sense of the shot fired, but in making sense through one’s response, that society, if not humanity, might still have a shot at its own redemption.

5 Replies to “Contemplating Babel in many tongues and voices”